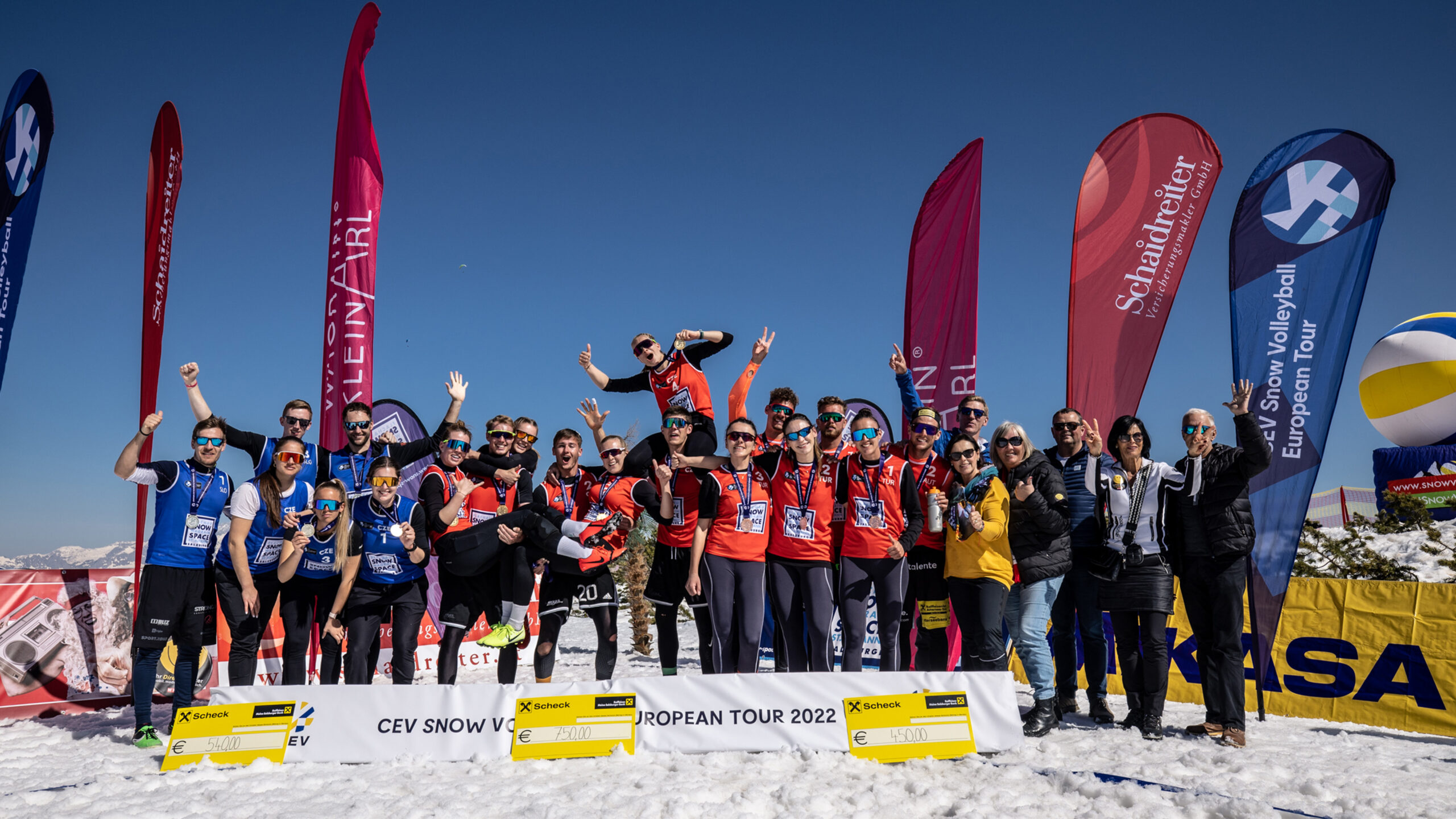 What a finale of the CEV Snow Volleyball European Tour 2022! The last day in Wagrain-Kleinarl lived up to all expectations, the women’s and men’s teams showed top performances on the centre court in imperial weather. The national champions Florian Schnetzer, Mathias Seiser and Moritz Kindl won the bronze medal at the „Flying Mozart“ mountain station at 1,850 metres above sea level. A year ago, the trio had already shone in silver in the Mecca of this young and spectacular sport. The most successful nation was Czech Republic with two gold medals and a second place.

The conditions on Sunday, as on the first two days of the tournament, could not have been better – spring temperatures and bright sunshine, a breathtaking panoramic view, whimsical moderation and a DJ ensured the best atmosphere for athletes and fans alike. The women’s semi-finals, which went over three sets and brought Czech victories, kicked off the event. Frommova/Safrankova/Marcelova defeated the top-seeded Turks Gökalp/Merve/Yalcin – already winners in Kayseri-Erciyes this year – 15:12, 12:15, 15:12. Jamborova/Francova/Drazanova/Budinska came from a set down to beat Tagliapietra/Tonon/Parenzan of Italy 7-15, 15-7, 15-10.

The men’s semifinals did not go the full distance, but were no less exciting. Especially the duel between Austria with Schnetzer/Seiser/Kindl and Slovenia with Bozenk/Pokeršnik/Robida could hardly be surpassed in intensity. With 14:16 and 13:15, the Austrians were only narrowly defeated. The second ticket to the final was won by the Czech champions Mrkous/Trousil/Pihera thanks to a 16:14, 15:9 victory over the experienced Lithuanians Vasiljev/Matulis/Stasevicius/Mikucionis.

In the first medal match, Gökalp/Merve/Yalcin had the upper hand against the tired Italians 15-12, 15-5. The Turks thus finished on the podium in all three European Tour events. In February, they finished third in Kahramanmaraş (TUR) and won in Kayseri-Erciyes (TUR) a week ago.

Similarly, the men’s match for third place was a rather one-sided affair. Seiser/Kindl/Schnetzer showed Snow Volleyball at its best in the 15:8, 15:11 over Lithuania. „This is a conciliatory ending, at the end we showed once again what we are capable of. Unfortunately, we did not succeed in the semi-finals. We actually did everything better than against the Slovenians –  harmonised very well again. The spectators who cheered us on also made a big difference, of course. After such a final performance, there are no crying faces, only grinning faces. A sensational tournament, a big thank you to the organisers,“ as a satisfied Matthias Seiser summed up in the ORF SPORT + interview.

Czech Republic with three teams to two golds and one silver

The women’s final was an all-Czech affair – with the better end for Jamborova/Francova/Drazanova/Budinska. Czech Republic 2, who were one of the few teams to compete with four players (a change of players is allowed in Snow Volleyball), beat Frommova/Safrankova/Marcelova 15:11, 5:15, 15:9 and thus took revenge for their defeat in the final of the national championships a month ago in Brno. A Czech triumph all along the line in Wagrain-Kleinarl was provided by Mrkous/Trousil/Pihera in the men’s final. The trio from Prague won against the Slovenian team Bozenk/Pokeršnik/Robida 15:10, 15:12.

The final day of an all-round successful European Tour stop was also not missed by ÖVV President Gernot Leitner. „It makes us proud that so many nations (13, note) found their way here to the ski resort Snow Space Salzburg. Snow volleyball is developing steadily, establishing itself more and more and is really good to watch,“ said a pleased Leitner, who was satisfied with the Austrian’s performance: „Third place is definitely good, even if our national champions might have expected to make the final.“

The final day was broadcasted live on ORF Sport Plus – available on ORF-TVthek – and on YouTube via CEV!

In the following you will find the results of the CEV Snow Volleyball European Tour in Wagrain-Kleinarl (March 25-27):

Find out more on: www.cev.eu/snow